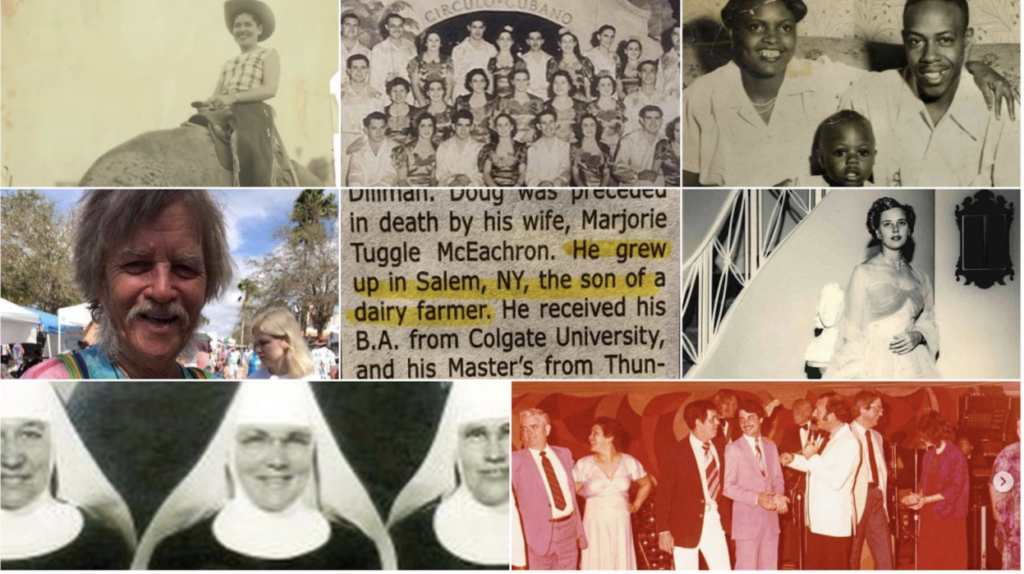 Photos from some of the obits in the Tampa Bay Times

“Writing obits is her dream job,” Maria Carrillo said after I sat down in Stephanie Hayes’ chic and light-filled office at the Tampa Bay Times two years ago to pitch an experiment.

“Are you OK?” Hayes deadpanned.

And after nine months working that dream job one day a week last year in part one of an experiment between Poynter and the Tampa Bay Times, I’ve also learned a lot about why you have to experiment, how to listen to data and why obits still matter.

The shortest version of this is that since 2015, I’ve tried to become a full-time obituary reporter, first at the Tampa Bay Times, then at the Dallas Morning News. Both times when I applied for that position, it evaporated (as open jobs in tough times are known to do.) At the very same time, I’ve covered local news for Poynter, a job I love for a bunch of reasons.

So, at the beginning of October in 2019, I sat in Hayes office with Carrillo, the enterprise editor I’d be working with, and Andy Meachum, then the art critic. Both he and Hayes wrote masterful feature obits for the Times for years before the position was eliminated.

We re-launched the series, then the first obit, which the Times calls Epilogue, in December of 2018. The goals for Carrillo and I then were simple – find interesting local people and tell a story from their lives, not their whole life story.

I made a ton of mistakes along the way.

For the first several weeks, I chugged along, writing about the lives of the Cuban exile, the diamond-swallowing-viral-grandma, the Marine whose remains came home after 50 years, the lady who loved to read, the teacher who empowered other women, the citrus grower who just wanted to be on the water, the former big-city chef who never stopped cooking and the former Tampa Bay Buccaneers player who was a gentle giant.

Looking at Google analytics, we saw the stories did just OK.

Carillo and I met with the Times’ Chris Tisch to see what was working and what we could and should change. His advice had me shaking my head that I’d forgotten these very basic things about writing for online audiences – you have to get the headline right, you have to get the photo right.

And couldn’t we add more photos? he wondered. He made one more smart suggestion – cut the word Epilogue from digital. That’s a print brand. Like a lot of things journalists find precious, it does not matter on the internet.

We also changed the day we published them online to fit the audience, not ourselves.

Pre-COVID-19, I scanned paid obits, but also worked hard to overcome social and institutional barriers, finding as many local funeral homes as I could and checking their websites regularly.

In our first nine months, we got close to publishing stories that reflect our community. The population of Tampa Bay is roughly 65% white, and our obits were, too. Our population is 20% Latino and Hispanic, and 15% of our stories featured that demographic. About 11% of our population is black, and we fell slightly short of that with 9%. We also featured twice as many men, regardless of race, as we did women.

As we sharpened our approach, we saw our feature obits index higher than average stories on uniques, time spent and the path to digital subscriptions.

In the fall of 2019, I had several work trips planned, both national and international, and we paused our project. That’s when I remembered RJI and wondered if this experiment would make a good fellowship.

My pitch was to build on what we’d learned so far about what made local obits successful and how to write them for a digital audience. I plan to create a newsletter, a robust presence on social media, and to use all of that to build a template for other local newsrooms to learn from our successes and mistakes.

And that’s still what we’re doing, but COVID-19 has led to some changes.

In June, I met, virtually of course, with a team of editors at the Tampa Bay Times. They’ve already started an ambitious and meaningful project to document every life lost in Florida to COVID-19. We decided I’d use those obits, for now, to look for candidates for bigger features.

And after putting them all in a spreadsheet and reporting my first one, I know that was the right call. We’re living through extraordinary times. And because of the pandemic, we’re losing extraordinary people – The nurse who raised her grandbabies and taught them never to back down; the man who carefully chronicled his family in elaborate albums; the couple who had just started dating and both got sick.

We’re now working out a rhythm to reporting these stories in the midst of the pandemic and ongoing protests. By the end of the summer, we’ll see what the data tells us about what’s resonating and with whom, and we’ll figure out what kind of a newsletter to start – one for subscribers or for the public.

The world has changed a lot since we first revived this feature, but, especially now, these are stories that should, and will, be told.