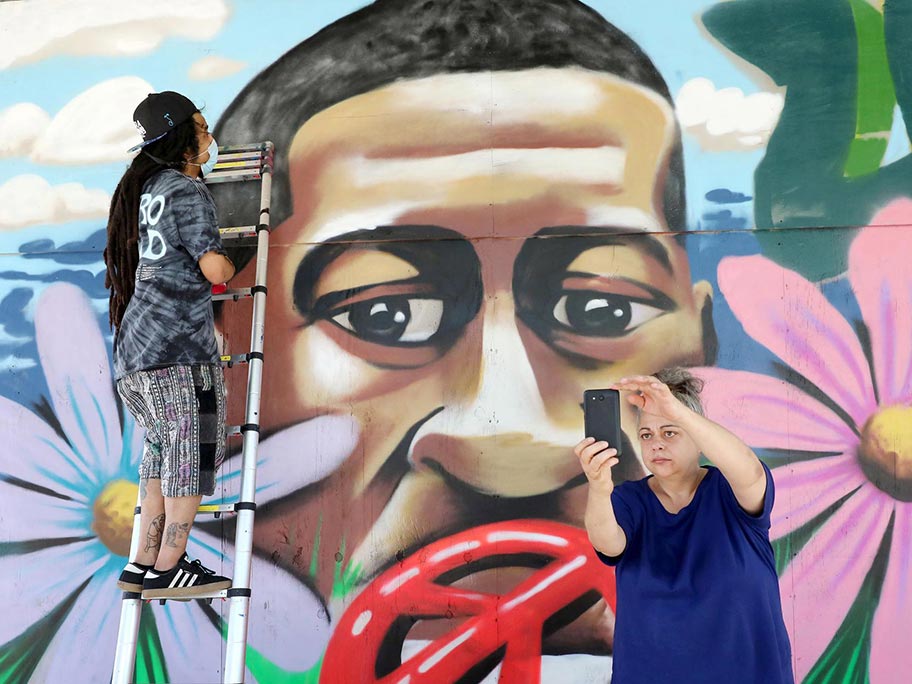 In this photo from June 2020, Lincoln Rust, left, and Anthony Catteruccia (not shown) made this mural on the Wisconsin Veterans Museum following the George Floyd protests. | Photo: John Hart, State Journal

The sustainability of local journalism is tied to the strength of local business and both have been rocked by a deadly pandemic and roused by nationwide rallies for racial equity.

In developing blueprints for an equitable post-pandemic recovery, communities have a critical opportunity to address the role of local media in creating a more accurate narrative of economic prosperity — and to explore the community’s obligation to support and sustain a robust and resilient local media ecosystem capable of contributing to a vibrant and inclusive economy.

When the local business community is unwelcoming, discriminatory or lacking in diversity, the economy suffers. Likewise, a lack of diversity and systemic bias corrupt the mission of journalism and produce narratives that are inaccurate, incomplete and reinforce systems of oppression.

Take Madison, Wisconsin, a city that consistently ranks among the best places to live in the U.S. It’s also a city where:

Madison also is home to a number of local news outlets, from nonprofit digital startups like Madison 365 and Wisconsin Watch, to legacy print newspapers and alt-weeklies like the Cap Times and The Isthmus — all of which are in desperate need of a more sustainable business model.

Right before the city shut down in March, the Cap Times highlighted how racial disparities have only gotten worse “despite decades of reports, task forces and funded programs.”

Can community-centered convenings hold space for local media, local businesses and economic development planners to find common ground around issues of economic inclusion? Can those conversations spark new thinking and actions that help the local economy and local media to thrive?

To find out, the Reynolds Journalism Institute teamed up with Local Voices Network and Downtown Madison Inc. to invite local business owners and journalists in Madison and Dane County to an Aug. 17 virtual conversation about reimagining the local economy and the role of local media in that economy. In all, 17 locals participated. They represented small business owners, finance and credit unions, local ministry, the Madison Public Library, City of Madison economic development staff and reporters from public radio, the legacy print paper and a digital startup.

In setting the stage for the small group conversations, the LVN team shared statistics about contraction in the media industry and data about BIPOC (Black, Indigenous and People of Color) business ownership in the community and closures during the pandemic. Then, participants were split into three breakout groups of 5-6 people for more community-focused discussions.

You can read the full report here.

We see these conversations as a critical step in a larger process of building trust, creating a shared set of goals, and designing and testing solutions that are rooted in principles of inclusive competitiveness and geared toward building a culture of sustaining inclusive local news and information ecosystems.

That culture is one where local reporters and publishers, in conversation with members of the business and economic development community:

Linda Miller is an experienced journalist, media innovator, and consultant to The Diversity Institute. She led the Public Insight Network and co-launched an initiative focused on changing racial narratives in media. She’s working with RJI to develop inclusive economic and engagement strategies for journalism.

Max Resnik is the Lead for Media and Journalism with Cortico, a non-profit founded in 2017 to build systems that bring under-heard community voices, perspectives and stories to the center of a healthier public dialogue. Previously, he was a documentary filmmaker and managed a community events space in a drafty landmarked firehouse. He received his MA in Social Journalism from the Newmark Graduate School of Journalism at CUNY.