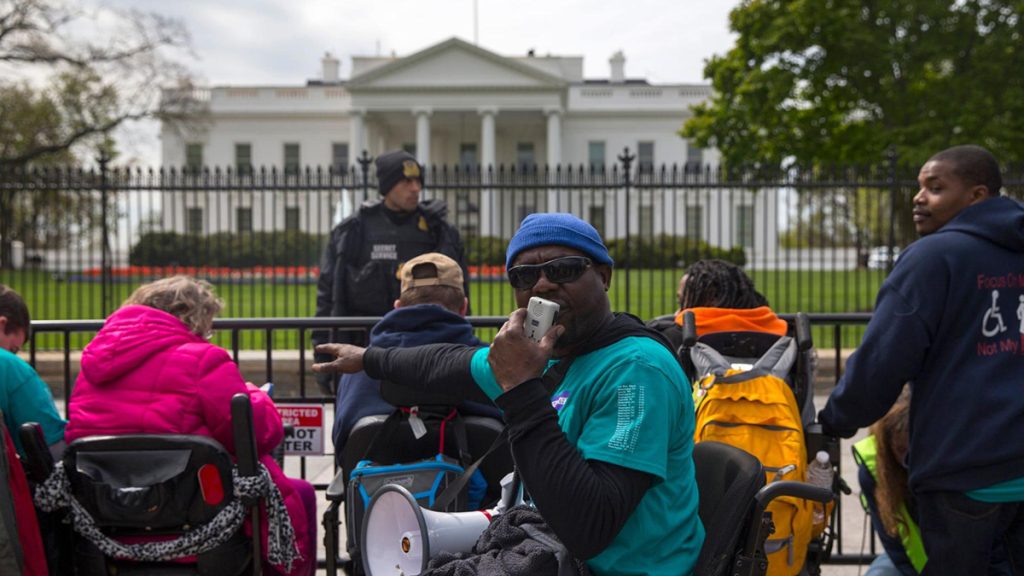 Get to know these key moments from disability history and how they inform disability activism, policy and culture

The fight for disability rights in the United States has been long, and is not over. The Disability Rights Movement was not defined by a single organization or leader, but rather a collection of different organizations advocating for the needs of people with specific disabilities or living in  individual states.

More recently, disability activists have expanded the disability rights movement’s work to create the Disability Justice framework, which uses a more comprehensive and intersectional approach to secure rights for disabled people that also examines how race, gender, class and sexuality also factor into the oppression of disabled people.

The following are themes and events from disability history that inform and influence contemporary disability issues and culture. Journalists looking to improve coverage should familiarize themselves with these important moments in disability history:

Note: This section uses language that is historically correct, but no longer considered acceptable.

In 1817, Thomas Gallaudet founded the American Asylum for the Deaf in Hartford, Connecticut. It was the first disability-focused institution in the country. Residential schools, institutions and asylums where some disabled people spent their entire lives grew in popularity across the United States in the 19th century, as did circuses and exhibitions that turned disabled people into objects of entertainment.

So-called “Ugly Laws” allowed police to jail people for being “disfigured” or demonstrating a disability. The last of these laws in the U.S. was repealed in Chicago in 1974.

A history of sterilization and eugenics

Eugenics was widely practiced in America with the goal to “breed out” undesirable traits by reducing the non-white, mentally ill and disabled populations. Federally funded eugenics boards operated in 32 states, and forced sterilization was a common practice at institutions and asylums. California’s “Asexualization Acts” were reported to have inspired eugenics and genocidal policies used by the Nazis.

In 1927, the Supreme Court ruled in Buck v. Bell that compulsory sterilization was constitutional, stating that it would prevent the country from “being swamped with incompetence…Three generations of imbeciles is enough.” The Court has never explicitly overturned the case.

Forced sterilization is still practiced in the United States. An investigation by Reveal found that doctors under contract with the California Department of Corrections and Rehabilitation sterilized nearly 150 female inmates from 2006 to 2010 without required state approvals. And in 2020, a whistleblower complaint by a nurse said that U.S. Immigration and Customs Enforcement detainees had told her they had had their uteruses removed without their full understanding or consent.

Disability in the White House

Franklin Delano Roosevelt, the best-known U.S. president with a disability, was elected in 1932. He supported the founding of the National Foundation for Infantile Paralysis (now known as the March of Dimes) and signed the Social Security Act, which created a permanent program to assist adults with disabilities. While he was an advocate for disabled people, Roosevelt often tried to hide his disability and use of a wheelchair from the public.

The earliest disability law in America ensured that soldiers wounded in the Revolutionary War were guaranteed pensions. The Civil War, World War I and World War II saw a surge in disabled Americans. Post-war periods often see an increase in public concern for the long-term welfare of those returning from conflict. Investments in rehabilitation programs for disabled veterans and assistive technology like enhanced prosthetics are often made following wars.

Disabled veterans were a major part of the disability rights and accessibility movement that began in the 1950s and were part of efforts to develop national standards for “barrier-free” buildings.

The fight for independence

Summer camps and rehabilitation centers in the 1950s, 1960s and 1970s became places for people with disabilities to build connections and community. The disability rights movement grew out of the friendships formed at camps like Camp Jened, which is depicted in the documentary “Crip Camp.”

Among those activists was Ed Roberts, a man with polio who fought to be admitted to the University of California, Berkeley. He became the first student who used a wheelchair. Because there were no accessible campus housing options, he lived in the campus hospital. He and the experiences of fellow disability rights advocate Judy Huemann inspired the Independent Living Movement and the first Center for Independent Living.

After Brown v. Board of Education abolished school segregation, parents filed numerous lawsuits pushing for access to a public school education for their disabled children. They wanted their children taken out of institutions and asylums and given opportunities to engage in society.

As a result, the Education for All Handicapped Children Act — now know as the Individuals with Disabilities and Education Act — was enacted in 1975. It requires that federally funded public schools provide access to education and one free meal a day to children with disabilities. It has become a model for other disability laws.

In April 1977, protestors marched outside government buildings to demand that lawmakers sign the regulations enforcing Section 504 of the Rehabilitation Act of 1973. The provision, modeled after the Civil Rights Act of 1964, prohibited federal agencies, public universities, and other public institutions receiving federal funds  from discriminating  against disabled people. The Department of Health, Education and Welfare had been tasked with outlining regulations and implementing Section 504, but had failed for four years to enact it.

A group of more than 100 disability activists entered H.E.W.’s San Francisco offices and occupied the space for weeks. After 25 days, the department allowed the regulations to take effect. The protest is the longest occupation of a federal office by protestors in U.S. history.

In 1978, a group of 19 people gathered at Colfax Avenue and Broadway in Denver, got out of their wheelchairs and lay down to stop traffic in one of the city’s busiest intersections. The group, which had been pushing the city to install wheelchair lifts, were protesting the inaccessibility of the city’s public transit system.

ADAPT protests have continued. In 2017, the group staged a die-in outside of Sen. Mitch McConnell’s office in Washington, D.C. to protest the Republican efforts to cap and cut Medicaid. Dozens were arrested and some were dragged from their wheelchairs by police.

In 1988, Gallaudet University, a liberal arts college for Deaf people in Washington, D.C., appointed a president who was not Deaf. In fact, the university had never had a Deaf president.

Students, alumni and faculty protested the appointment. Following the week-long protest, the university reversed its decision and named I. King Jordan its first Deaf president. The protest became an important moment in the disability rights movement because it led to conversations about what it means to be Deaf and questions about belonging and self-determination in Deaf spaces.

Months before the Americans with Disabilities Act was signed into law by President George H.W. Bush, the bill was stalled in Congress. On March 12, 1990, hundreds of disability rights demonstrators gathered on the National Mall to protest the delay.

Many protesters abandoned their wheelchairs and mobility aids  and began to crawl up the marble steps to the Capitol entrance. The protest became known as the Capitol Crawl and emphasized the inaccessibility of physical spaces that the ADA’s “reasonable accommodations” clause was intended to address. The protest was instrumental in the law’s passage.

President George H.W. Bush signed the Americans with Disabilities Act into law on July 26, 1990. The landmark legislation prohibits the discrimination of disabled people in all areas of public life including jobs, schools, transportation and all spaces that are open to the general public. The ADA extends civil rights protections similar to those provided to individuals on the basis of race, sex, nation of origin, age and religion.

The ADA has yet to be fully realized. The law is difficult to enforce and the burden is put on the disabled person to file a complaint with the Department of Justice or lawsuits.

One of the most important Supreme Court decisions for disabled people came in 1999 and played a major role in categorizing mental illness as a disability under the law.

Lois Curtis and Elaine Wilson were two women with mental and intellectual disabilities who had been treated in Georgia hospitals, but held in state institutions for years while waiting for placement in community-based facilities.

In a 6-3 decision, the Supreme Court found that the ADA required patients with mental disabilities to be placed in “integrated settings” when they are medically cleared for them, the patients themselves desire to live in such settings, and resources are available. In other words, the unjustified segregation of disabled people is discrimination that violates the law. The ruling reinforces the rights of disabled people to live in the community.