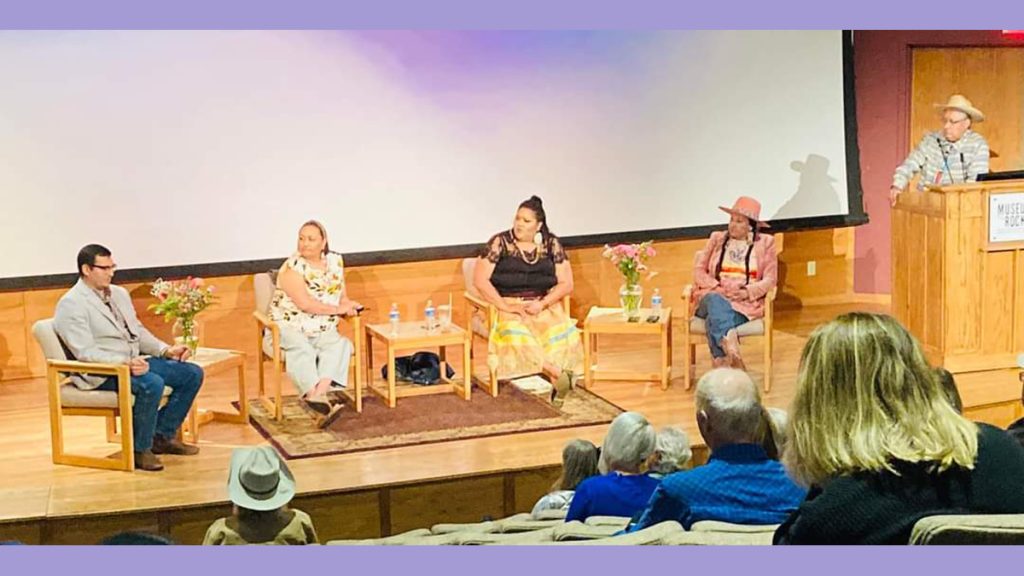 Crow tribal members Jay Harris, Rose Real Bird, Luella Brien and Olivia WIlliamson participate in a panel discussion at the opening of the Apsaalooké Women and Warriors exhibit at the Museum of the Rockies in Bozeman, Mont.

A community centered newsroom on the Crow Indian Reservation, Montana

I’m a community journalist turned news organization founder, and I cover my home community on the Crow Indian Reservation in Montana. These days it feels as if everything I do is being critiqued, if not by me than by my community. Am I writing too much crime and not doing enough enterprise reporting? Do I keep writing about a certain extended family? Are my stories too long? Too short? The pressure I put on myself to do good work is exhausting, but I wouldn’t want it any other way.

You see, I’ve tried the other ways. I’ve been part of corporate media, swooping into a community taking a snapshot of a moment in time and swooping out as fast as I could. Being treated as a cog in a machine, expendable and never valued. I’ve been a part of the so-called locally owned family newspaper who spent years cultivating relationships in the community, but never cultivated the relationships with their own employees.

I feel like I’ve seen it all, from intern to publisher. I’ve taken on several roles in a newsroom, but there has always been something that made people treat me differently than the rest. I’m a bit of an anomaly in the news industry — I’m an Indigenous woman.

The old trope is that journalism is a male-dominated world, but my experience has been that there are many amazing women in the newsrooms here. Every Montana newsroom I’ve been in has been equally split by gender, but more times than I care to admit I was the only Native.

American Indians make up 1.5% of the national population. A lesser known fact is that less than half of 1% of journalists working in America are Native. We surely are a small slice of the American pie. But in markets like rural Montana, home to eight Indian reservations, there is absolutely no excuse for me to be one of only a handful of Native journalists statewide.

I got tired of telling my children they could be anything they wanted as long as they put in the work, while working for an industry that only showed us at powwows or in mugshots. I got tired of arguing about why regularly covering the reservation is just as important as regularly covering everywhere else. It was exhausting. My love for journalism wavered, and I threw my papers in the air and walked away from it all.

Once you get ink in your veins, you can’t help but return. After two weeks of rest and recuperation, the nonprofit Four Points Media was born. We launched our website, Four Points Press, in November 2021.

My plan for Four Points Media includes our news site, a podcast network, a publishing house and a documentary film production team. Do I dream big? Yes, and this plan will likely take 20 years to fully develop, but if I’m going to be exhausted, I want it to be from creating something beautiful in my own community, the Crow Indian Reservation.

So far I’ve learned that my community trusts me, and I do not want to lose that trust. When I quit my job at the local newspaper I had members of my tribal community asking me when I was going to start my own newspaper. It was just another sign that the need for credible journalism was there.

I come from an incredibly small community. There are 5,000 people spread over a 2.2 million acre reservation and we are averaging over 2,000 unique users a month on the website, so there is a lot of community buy-in, but learning to set a boundary with my readers, who are oftentimes related to me, has been a struggle. I vacillate between wanting to cover everything they suggest and not wanting to let readers direct all of our news content.

Being a founder hasn’t helped me become a better communicator in my personal life. I have had so many scheduling conflicts and missed opportunities because I have not been able to keep up with everything from raising three kids, managing two other jobs and working to build Four Points Media. ADHD is a challenge and organizational diagrams + visual workflows are imperative to keeping everything in line.

Despite all of the work, building a news source is more rewarding that I ever would have thought. I know that serving my community is the key to that passion.