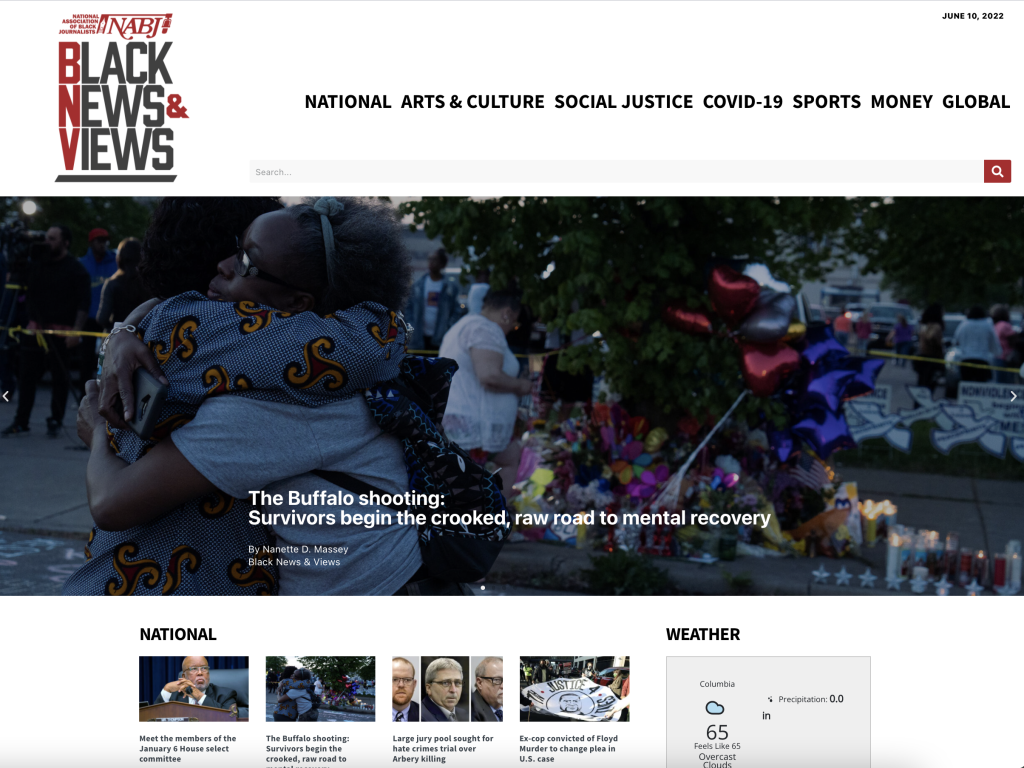 In collaboration with the Reynolds Journalism Institute (RJI) at the University of Missouri, NABJ has built a news platform that will aggregate content from Black journalists from a wide range of news partners, including Black-owned media and national media such as the Washington Post, USA Today, Bloomberg, ESPN, NBC and CNBC, and many others.

But aggregated news is only part of the equation; the site will also be producing original journalism aimed at providing news about Black communities by Black journalists.

“We will feature those hidden gems and good reads that rarely see the light of day,” said Melanie Eversley, BNV executive editor. “BNV is a destination site for people seeking well-executed journalism about Black people around the world.”

“We are creating original content that people might not typically see except at the end of a newscast or during Black History Month,” added Tamara Banks, Director of Content and Media Partnerships for BNV. “We want to reach the Black community in a way that has never been done before, to give them news they might not otherwise get.”

Black News & Views features articles, op-eds, videos, and podcasts, and a newsletter will also be launched to highlight top stories. Of particular interest to the site’s founders are stories that receive little coverage in mainstream media, or those that take highly covered stories in a new direction. For example, one upcoming piece will take a deeper look at the political and community backdrop behind the racially motivated Buffalo shootings.

The range of content and the network of relationships with publications and journalists across the country reflect the continuing growth of the NABJ, which was formed in 1975 by 44 journalists and now counts a membership of more than 4,000. Members include student and professional journalists, educators, and other media professionals.

While the site itself depends on collaboration, with stories coming from a mixture of freelance reporters and news publications, Black News & Views was collaborative from its inception. RJI provided funding and helped manage the technical development of the site, an effort led by Kat Duncan, Director of Innovation at RJI.

“Black News and Views is an important resource I am proud to have helped create,” Duncan said. “Black communities are often underserved by news outlets, this platform will give them a place to access the vital information and news they need and deserve.”

A “think and do tank” that works with the news industry, professors, students and others to strengthen journalism, RJI serves as a significant source of funding and expertise for projects and programs nationwide that seek to advance innovation and diversity in the industry.

“RJI has been phenomenal in their support,” Banks said. “In news media, we always say we need to ‘feed the beast’ by getting stories out day after day, but in this case, we had to build the beast before we could feed it. Kat Duncan and her team have been extremely helpful in helping to manage the project.”

Sandra Dawson Long Weaver, one of the organization’s original founders and the Director of Content for Black News & Views, emphasized that while stories will focus on the Black community, the site’s audience should be broad.

“This is one of the most innovative and creative things we’ve done since founding the organization,” Long Weaver said. “Yes, our focus is on covering overlooked or underreported stories that impact the Black community, but this is a place where everyone can come to find that information. This is black journalism, but it’s also just good journalism that everyone can appreciate.”

Banks and Long Weaver said the site will also highlight the work of black legacy media, some of which are more than 100 years old and located in cities that don’t have a strong national presence. By offering a new platform for these publications alongside major national media, they hope to raise the profile of Black journalists and media that share important but oft-overlooked stories.

“There is so much history that has not been told about Black Americans and our contributions in building this country,” Long Weaver said. “But more conversations are happening now. People are realizing there are a lot of important stories they don’t know about. So this is the perfect time to give those stories the platform they deserve.”

Want to learn more? RJI Director of Innovation, Kat Duncan, will be hosting a webinar with the Black News and Views project team, Melanie Eversley, Tamara Banks and Sandra Dawson Long Weaver on June 16 at 11am CT to answer questions about how you can freelance, get involved or support this platform. You can register for it here.