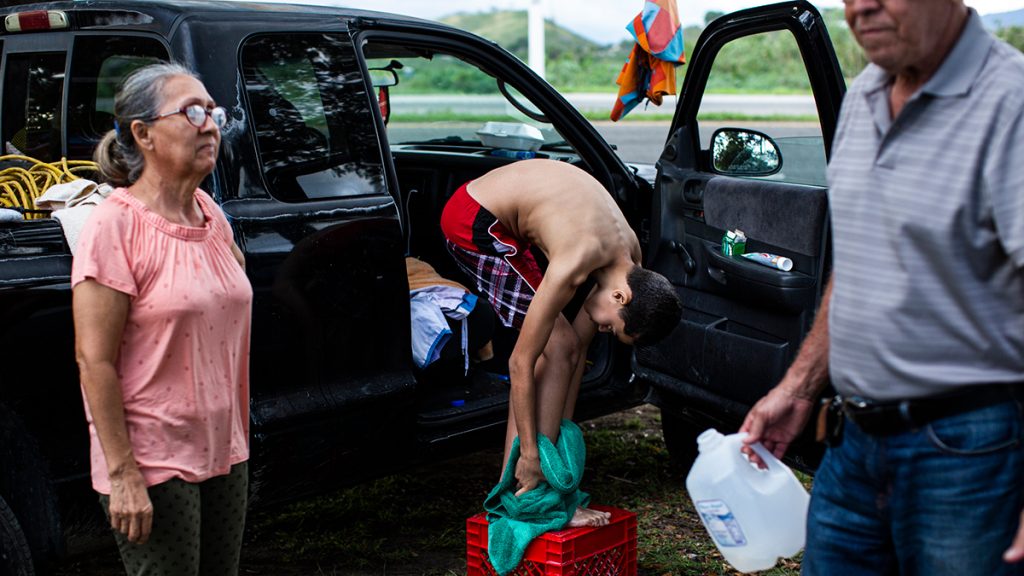 Annie Mercado, 62, and Rafael Torres, 71, help their grandson, Yonatan Elí García, 10, bathe outside an encampment next to the 166 road in Guánica, Puerto Rico on Jan. 8, 2020. They have been staying in the area since the island was hit with a 6.4 magnitude earthquake Jan. 7, the second major shake that week, leaving significant structural damage throughout the south. Photo: Erika P. Rodriguez

Community support, communication, and planning are your most important safety tools

Erika P. Rodriguez, a freelance visual journalist based in San Juan, Puerto Rico, was already photographing the aftermath of a 5.8 magnitude earthquake that hit the island on Jan. 6, 2020 when she experienced a terrifying aftershock. Standing in the middle of the street, Rodriguez was frozen in surprise and fear as the ground rippled beneath her feet. A colleague who was working with her that day yelled her name, snapping her out of it long enough for them both to move toward a more secure area away from live electrical wires and other immediate dangers. Rodriguez says she learned an important lesson about herself that day: “Anytime I cover something dangerous now, I tell colleagues it’s OK to direct me or grab my arm because now I know I might freeze and I have to make a plan for that happening.”

Being self-aware enough to know how you’re likely to react in a crisis situation makes it possible to both plan ahead for yourself and prepare others you’re working alongside how best to help you if necessary. When reporting on environmental disasters like floods, earthquakes, hurricanes, and wildfires, one of the biggest elements that can keep you safe is not working alone and communicating clearly before you’re in crisis mode.

Like many of the journalists I’ve spoken with in relation to this project, Rodriguez echoes that sentiment as she speaks about covering two major earthquakes, hurricanes Irma and Maria, and political unrest in Puerto Rico over the last few years. “All the things I’ve learned about how to manage myself and keep myself safe are through my peers,” she says.

Though she has since completed a HEFAT via the IWMF, she didn’t have access to safety training prior to her first experiences reporting on storms and earthquakes. Instead, she relied on the shared knowledge of a tight knit community of fellow visual journalists who support one another before, during and after their freelance assignment work.

While reporting in the aftermath of the earthquakes, Rodriguez describes one such colleague asking her to help him be more aware of not running into any buildings. “When you’re in the moment your adrenaline is so high, there are aftershocks happening every few minutes, there could be a tsunami, people are fleeing their homes. So, it’s important to talk through how to make the best decisions and what risks you’re each willing to take,” she says.

That level of ongoing communication is imperative prior to entering spaces of crisis — setting clear meetup points and time periods within which someone should expect to hear from you. Also, knowing how to contact colleagues on the ground and any editors you’re checking in with as you file on deadline. Rodriguez says the potential lack of access to communication tools is one of the main things people forget to take into account. “You have to have a backup plan for the backup plan, not just for how to send pictures to editors, but for any kind of communication.”

During one of the storms she covered, cell phone service and all other lines of communication went down entirely for her area. The only source of information for a week after the hurricane passed was one of the local radio stations that hadn’t changed to digital yet. It helps to have communication tools on hand that will alert others to your whereabouts even when cell service is unavailable. The day after the first earthquake, Rodriguez received a satellite tracker from The New York Times, a news organization she frequently works for.

“As a freelancer, if you’re covering something as risky as that for a newspaper, you should ask that they send you a tracker,” she says. “If any publication asks me to cover earthquakes, I will ask for this and if they won’t give me that support, I won’t do it.”

This begs necessary questions about duty of care as an independent journalist. Are publications going to be responsible for finding you in the event that you go missing? Who do you have an agreement with who will know when and where to look for you, both in the newsroom and beyond? One of Rodriguez’ planning safety tactics is setting up a group chat with a few people across different areas — both far away from her and close by. She shares her location, her plans for the day, etc. so multiple people are always aware of her whereabouts and an available network of support is geographically spread out. This kind of preparation often goes unmentioned by news orgs working with freelancers and some just don’t have the resources like the NYT to provide a high level of logistical support or material safety resources.

Alex Potter is an independent visual journalist and trauma nurse who has also worked as a wildland firefighter. She similarly points to the necessity of planning your communication, among other things. “In wildfires you should always have ideally more than one evacuation route because one route can get cut off. How do we get out if the comms are down and you can’t call a driver to come get you and the truck breaks down?” This, she says, is also the purpose for doing the work of a risk assessment beforehand, something she wishes she had known as a young journalist: “It’s really just a tool to get you thinking about xyz potential risks, mental scaffolding to prepare you for what might happen and how you’ll mitigate them.”

One thing that comes up often in my conversations with journalists who have experience working in environmental disasters is how dangerous a lack of knowledge can be. For example, Potter describes how accessible wildfires on public land can be for anyone to show up to, but “fire is incredibly complex and people don’t necessarily know how fire behaves in the wind. You can make one plan for egress and safety, but that gets completely thrown out the window when the wind changes from northwest to southwest.”

She says reporting on fire really means having the necessary equipment because it’s not always just a situation where you could be physically injured; it could be a situation where you might have to bunker down, so you need to have a digging tool. Or you might come across fallen logs along your wildfire escape route that are still too hot to touch, so you need a pair of leather gloves to safely move them out of your path. Every type of storm and natural disaster has its particularities that require different considerations, gear and risk assessment to report on it safely.

“The basic thing that applies to hurricanes is having enough days worth of food and water that you don’t need electricity to prepare,” says Rodriguez. She also points out that when you’re working, you’re out on the street burning more calories, so you’re likely to be hungrier and more tired, requiring more sustenance. But, “That kind of preparation falls on you. Newspapers won’t help you plan for that self-care.”

Rodriguez says that out of her various experiences reporting in risky situations such as earthquakes, hurricanes, and civil unrest, it’s earthquakes that are the scariest. “You’re in a constant state of alert and crisis because you have to talk to people and be in that moment when working, but anything can happen with aftershocks and tsunamis, “ says Rodriguez. “The risk is always there.”

The safest way to face the risks of reporting on any disaster as a freelance journalist is to never go it alone, but there are also essential tools and gear to keep on hand in a packed go-bag that will help prepare you to survive and successfully report in the event of an environmental crisis.

Take the Safety Survey:  Part of this project is trying to assess the safety and risk management needs of visual journalists around the world. Please take this survey to offer your thoughts, experiences and what you want to see taught in journalism safety training!

Follow us on Twitter and share your safety tips, gear and anecdotes from on the ground experiences using #sourceofsafety
I have put together a list of readings and an accessible Google Drive of resources that will be continuously updated over the course of this project and beyond. Please email info@sourceofsafety.org if you have any suggestions for guides, checklists, reports, templates or anything else to add to these living resources.