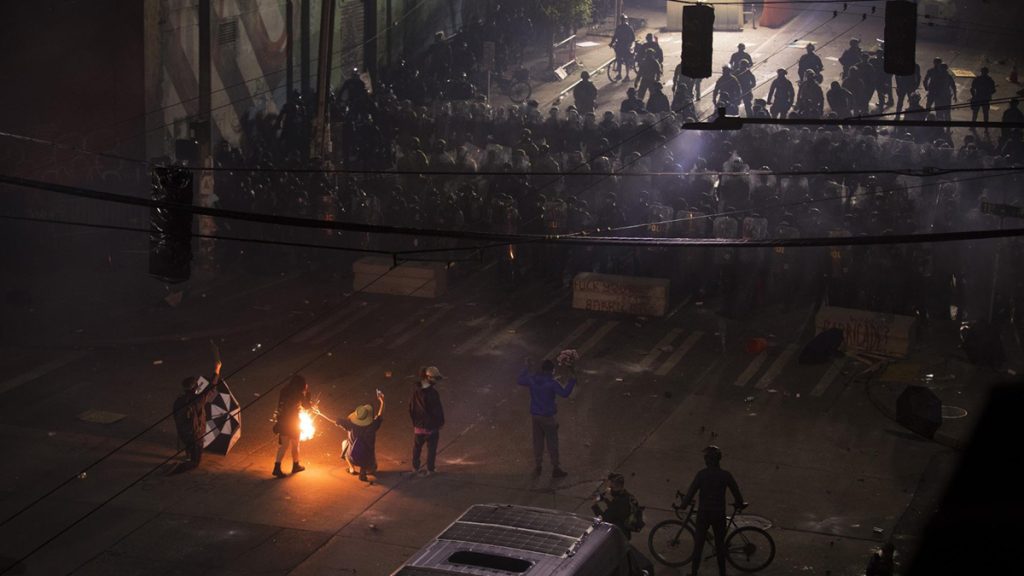 The exact moment that a flash bang grenade hit Aubreanna Inda, 26, on the 10th day of protests following the police murder of George Floyd, shortly after midnight on Monday, June 8, 2020, in Seattle. Inda was rushed to the hospital as medics and protesters performed CPR. Doctors would later tell Inda that she lost a pulse three times that night. Photo: Megan Farmer | KUOW Photo

Why we need trauma-informed safety training for journalists

“Bravery is overrated,” said Maria L. La Ganga, LA Times City Editor. “Getting yourself in a dangerous situation does no one any good.” I heard these words as an attendee of the Aug. 20 Society for Professional Journalists (SPJ) regional conference, where La Ganga was a panelist. Looking around the packed room of people who came to hear three veteran journalists and a professor of clinical psychology discuss “Dealing with Stress & Trauma: Covering it, Experiencing it, Coping with it,” I wondered how many of those present had accepted unnecessary risk in their work as journalists because they believed they had to.

Data from the 2022 State of Photography Report, a project I led with Catchlight, showed that risk is something working photographers generally accept in their work. More than 88% of those surveyed said they always, almost always or sometimes accept risk. Only 8% said they never or rarely took a risk.

A contemporary view of the dangers faced by journalists must also take into consideration the uptick in anti-media rhetoric and a public distrust of journalists that makes all media increasingly unsafe while reporting on any news story. Too often, journalists experience these overlaid traumas and then have little to no support for recognizing and repairing the ongoing psychological harm such experiences produce. This predicament was reflected in the portion of the 2022 State of Photo Report that focused on risks and safety for photographers. The data showed that “more than three-quarters of respondents noted health and psychological risks, declaring that mental health and wellness was at least occasionally an issue (with nearly one-quarter saying it was usually or always an issue).”

I spoke with visual journalists who have been at the front lines of covering civil unrest and COVID-19 in the last few years, both of whom pointed to a frustrating lack of mental health resources for journalists. Vanessa Charlot, a photojournalist and Assistant Professor of Creative Multimedia at University of Mississippi who was an IWMF NextGen Safety Trainer Fellow, recounted the differences between her experiences as a former Army service person and her current roles as a visual journalist and safety trainer for other journalists.

“I served in the U.S. Army where, of course, I had extensive experience in how to keep myself safe in conflict and in hostile environments but that was through a military lens. After joining the NextGen safety trainers, I realized there was a lot that journalists were missing,” Charlot says, speaking to how the training she received as a NextGen fellow was “super holistic in that it talked about our identity and also covered things other safety trainings do, but what I found so important was the trauma informed aspect. After you cover the story, how do you take care of yourself and how do you decompress?”

That is a question central to a trauma-informed approach in journalist safety training. Recognizing that the work journalists do is both impactful to the communities they cover but also has a personal impact on them allows journalists to prioritize their own psychological health. In order to continue doing the important work of journalism, news media producers have to protect themselves from burnout by practicing self-care.

Self-care is something Charlot has since learned to prioritize, but when she describes her experience photographing racial justice protests, she says, “It wasn’t until I was knee deep in the work that I realized this was a much larger issue. If I knew how to better take care of myself, I would’ve had better resources to deal with how emotionally impactful doing this work was. As a service member you don’t get that, you’re taught to soldier on. That was my approach in the streets, I just soldiered on. Then I became aware that this was deeply traumatizing.”

Megan Farmer is a staff photographer at Seattle’s NPR station, KUOW Public Radio, and she describes multiple instances where she was endangered while covering several racial justice protests in the summer of 2020. Farmer has run the mental and physical gamut of trauma-inducing risks: from the terrifying feeling of being unable to breathe after a police tear-gassing to teaching herself how to tie a tourniquet in case she was shot by a local man who was threatening to kill journalists. She was lucky enough to receive a safety training through her newsroom that she says was very useful and informative as she had those experiences, but Farmer also suggested other elements she’d like to see more of.

“Visual journalists could benefit from more training around processing the events we witness, more mental health training and newsrooms offering more support for their journalists,” says Farmer. “We send people out into these situations, so taking stock of what journalists have been through and what could help them process and manage all of that would be beneficial.”

While traditional HEFATS (Hostile Environment and First Aid Training) and other physical safety training teach journalists how to tie a tourniquet and respond effectively to a gunshot wound, the mental preparation required to knowingly go into an assignment where you might be targeted is not so commonly touched upon in such training. Similarly, how to respond to police tear gas and what kind of gas mask gear to have on hand in case civil unrest scenarios escalate are often learned in training, while the PTSD one might experience from being gassed or detained by police is not typically addressed.

While many journalists accept exposure to physical and health risks on the job, fewer recognize the psychological impact that constant exposure to traumatic events can have.

The first step toward normalizing attentiveness to journalist mental health is “acknowledging the toll” as Maria L. LaGanga said during that SPJ-LA panel. The Source of Safety project is  addressing the lived experiences of journalists as a central tenet of safety knowledge, recognizing that our preparation for dangers before, our management of risk during assignments, and our processing of what we experienced after are all equally important components of safety.

Rosem Morton, a photojournalist and registered nurse who has begun offering her first aid knowledge as a journalism safety trainer, says it’s important for journalists to understand how they’re affected by biological, psychological and social stressors. “With this comprehension, we are able to take stock of our current mental state and know what degrees of stress we can handle and what ways we can address them before, during and after a stressful event,” says Morton.

As part of her training, she teaches psychological first aid, offering tools that help journalists cope during and after trauma exposure. Morton says finding care and support — having it on call as you enter potentially traumatic situations and seeking it out when you feel your mental health has been compromised —  is a central element of psychological first aid.

“It is the act of listening to a fellow journalist without pressuring them to talk, it is offering them comfort to help them feel calmer,” says Morton. “It is connecting them to information, services and social supports so that they can continue to feel supported as they cope with a traumatic event like a school shooting or wildfire that has resulted in many deaths.”

A specific tool Morton offers her trainees and journalist colleagues is the “personal resilience toolkit” which she says is a great way to find different self care categories and holistic options to address mental, physical and emotional health.

Journalism Source of Safety will pull together many more resources like this in the final product, and I’ll be offering a few tips and takeaways each month throughout the process.

As part of my work on Source of Safety, I am offering weekly listening sessions so that journalists around the world can connect with me directly to talk about their experiences with professional hazards, safety concerns and risk management needs. If you’re interested in talking about any element of safety and security for visual journalists, please schedule a meeting with me here.

Part of this project is trying to assess the safety and risk management needs of visual journalists around the world. Please take this survey to offer your thoughts, experiences and what you want to see taught in journalism safety training!

I have put together a list of readings and an accessible Google Drive of resources that will be continuously updated over the course of this project and beyond. Please email journalismsos@gmail.com if you have any suggestions for guides, checklists, reports, templates or anything else to add to these living resources.