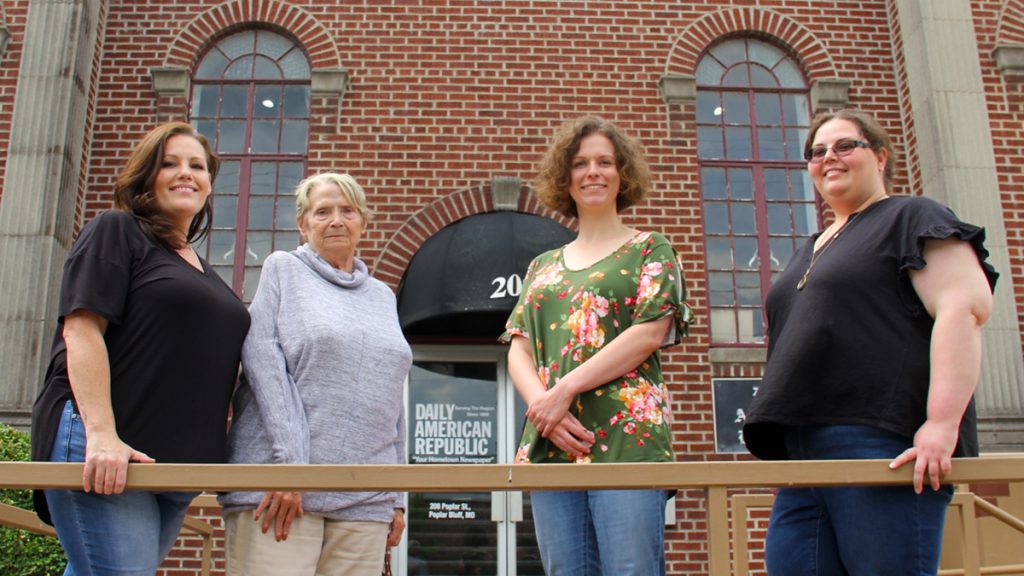 Small-town community newspapers are seeing something of a resurgence as an influx of regional chains reclaim them from national conglomerates and re-center them on local news. But some of the same factors that make these rural communities attractive markets for revamped local news — an aging population that continues to value the community-focused “refrigerator journalism” one might pin up on their appliance with pride, along with small staffs and relatively low revenues that make for a bargain acquisition — also present roadblocks to building a modernized local news machine.

To help rural newsrooms update their technology and take full advantage of social media and web content, the Reynolds Journalism Institute sends students at the Missouri School of Journalism to a handful of newspapers across the state for one week during winter break. The Potter Digital Ambassadors program gives students an experiential learning opportunity in working for a small community newspaper, but it also provides small community newsrooms with free training and guidance in maximizing their online presence by taking full advantage of social media and web tools.

The Daily American Republic (DAR) in Poplar Bluff is one such beneficiary of the program: Grace Cooper, who graduated in May with a Master’s degree from the School of Journalism, made the 250-mile trip to Poplar Bluff in January, where she was greeted with the challenge of helping to pull the paper’s small, disparate digital efforts into an efficient, strategic workflow that could help amplify DAR’s reach.

“We wanted to find a platform for their social media and advertising needs, something that could help them create social media videos and easily manage their resources in one place,” said Cooper, who now works as a commerce writer at Gear Patrol. “Digital and print often appeal to different audiences, and the feeling was that they weren’t getting the news in front of everyone they wanted to reach.”

Owned by Rust Communications — which is headquartered in Cape Girardeau, Missouri, and owns nine newspapers in the state — DAR has weathered the impacts of the COVID-19 pandemic and continues to publish a print edition five days a week. The paper’s digital presence, however, has been slower to keep up with the pace of the broader industry. This began to change in 2018 with the departure of the paper’s longtime publisher and part-owner, kicking off a period of transition.

“We just had a flipbook for a website when I got here [in late 2018],” said Chris Pruett, DAR’s current publisher and a veteran journalist who got his start in rural Indiana in 1983 at the Linton Daily Citizen (now the Greene County Daily World). “Our level of digital knowledge just hasn’t been at the level it needs to be in 2022. Grace came in with so much more knowledge about social media — how it can benefit us and draw more people to our product.”

Cooper’s arrival was not the first technological leap for the paper in the last few years — a new website launched in 2019, and an Instagram account came last year, finally giving DAR a presence on social media’s “Big Three” platforms. Cooper enhanced and unified these efforts by introducing the newsroom to two important tools: Canva, a graphic design tool that simplifies the process of creating videos and other visuals for social media, and Buffer which allows for scheduling and posting across all social media platforms in one place.

These tools were quickly embraced by the newsroom’s most senior reporter, Barb Horton, who grew up near Poplar Bluff and has more than 50 years of experience in the industry.

Like many small-town reporters, Horton has deep roots in the community she covers. Currently in her third term as a city councilwoman, she has spent her entire career in Butler County, forging ties and writing the kind of refrigerator journalism that has made her one of the most recognizable and respected journalists in the county. The proliferation of social media news has meant that some of those ties no longer mean what they once did — she isn’t always able to get a press release directly from the police department before she sees it pop up online — but she is far from bitter about social media’s rising influence.

“I’ve loved every new thing in my career, and I love social media,” she said.

Indeed, for Horton, the lasting impacts of Cooper’s time at the paper as a digital ambassador can be found not only in the technology the program brought into the newsroom, but in the continued insights and development it has spurred in Horton and her coworkers as social media-literate, multimedia journalists.

“One of the things I’m finding is that people believe social media, but not everybody who produces social media gets their facts correct or uses the right sources,” Horton said. “I’m more aware of what’s happening there because I’m using it more, and it’s so important that we make sure everything we do is correct so people go, ‘no, that’s not right because it’s not what the paper said.’”

A big factor in Cooper’s choice of Canva and Buffer was the added efficiency and flexibility they provide to a newsroom in which reporters tend to not only write stories but post them to the website and promote them on the paper’s social media accounts. With no dedicated social media or web manager, it falls to a newsroom with five full-time reporters (and one jack-of-all-trades who splits his time between DAR and two other Rust Communications weeklies) to keep everything running smoothly.

This jack-of-all-trades approach began with Pruett’s arrival as publisher, when the paper moved sharply from a mostly print-only product to an active digital presence. For editor Donna Farley, the shift has paid off both in the increased adaptability of the staff and the health of the paper.

Now, trained on tools that seem tailor-made for a cross-trained staff, DAR’s reporters are finding joy in the variety of digital options at their disposal.

“Canva gives you a lot of creative control, and I like that,” said Misty DeJournett, the paper’s newest reporter. Another local, DeJournett previously worked at the paper’s front desk as a teenager, where she would daydream about working in the newsroom.

Cooper’s weeklong efforts also injected new life into the job for reporters who relish the opportunity to create more inventive or artistic content.

“Using Canva and Buffer makes things so much more fun than just posting a photo and going, ‘this is what happened, please hit like,’” said reporter Samantha Tucker. “And I feel like we get a better response when there is some kind of creative graphic element. That’s the difference between getting eyes on something and getting people to actually engage with it.”

And it’s that engagement — that interaction with the community that deepens and expands with each new form of outreach that DAR adds to its repertoire — that drives the paper to seek opportunities like Potter Digital Ambassadors. Community ties are omnipresent even in the building itself, a noble brick edifice that is inseparable from the city’s history: it’s one of the few remaining buildings that survived the devastation wrought by a tornado that ripped through Poplar Bluff in 1927, killing 86.

The building is also still making new history: it was used as a staging area when the upcoming zombie thriller HERD, directed by Poplar Bluff native Steven Pierce, shot scenes downtown in the spring. In fact, this episode offers perhaps the clearest window into what community connections — whether forged through the latest social media and digital news tools, print newspapers, or good old-fashioned chats with the public over coffee — mean to the people who write the news of record in a small town.

“We didn’t just report on that story,” Tucker said. “We got to be a part of it.”

About Walter B. Potter, Jr.

In 2010, Walt Potter (MA ’81) established the Missouri School of Journalism’s Walter B. Potter Fund for Innovation in Local Journalism. The endowment supports teaching and research centered on journalism that serves small communities, such as towns in rural areas or individual neighborhoods in larger urban areas. Potter said his gift was in honor of his late father, Walter Sr., and was motivated by his career as a journalist as well as his positive experiences as a graduate student at the Missouri School of Journalism.