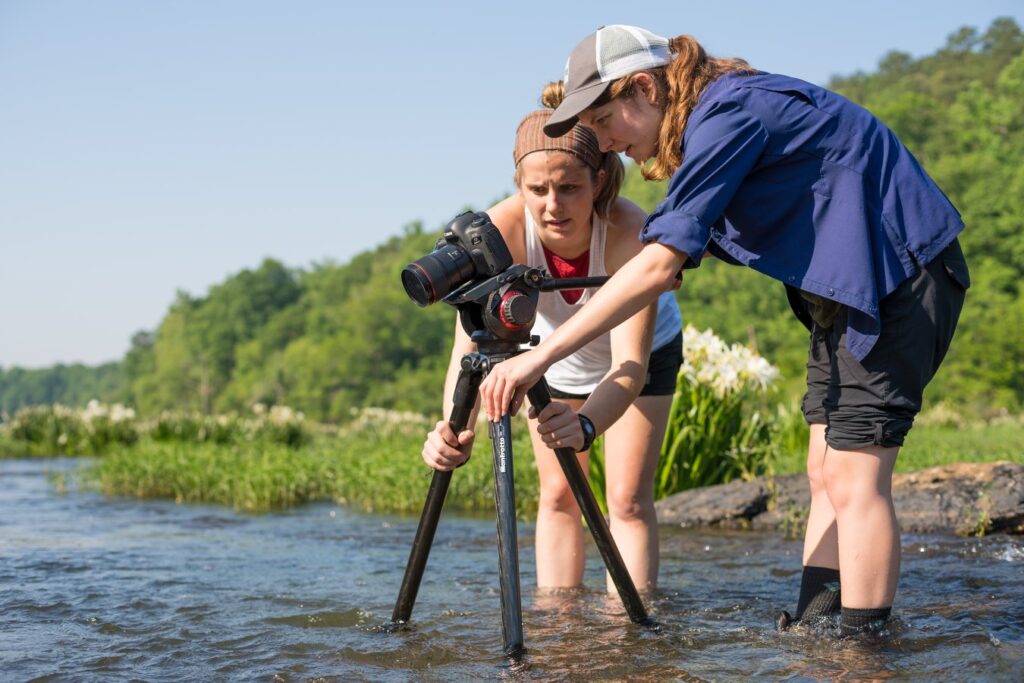 Catherine May and Lauren Musgrove film in the Cahaba River for This is Alabama. Photo courtesy of Red Clay Media

This summer for Innovation in Focus, we are speaking with news organizations that are exploring new, emerging or unique revenue models.

Alabama Media Group launched Red Clay Media in 2017 as a video driven revenue stream. It began with videos created in the newsroom that inspired engagement from their readers. Today it is a thriving video arm with three distinct brands that focus on feel good, inspirational and comedic southern content.

I spoke with Elizabeth Hoekenga Whitmire, senior director of audience development for Alabama Media Group and Red Clay Media, to learn more about how they’ve conquered what many newsrooms are still struggling with – making money with video content.

Duncan: How would you describe each of the brands under Red Clay Media?

Whitmire: It’s a Southern Thing is funnier, it’s going to joke a lot more when we share content. This is Alabama is just a really positive, excited voice. And People of Alabama is interesting because it’s not so much that the brand has a voice but many different ones that are the voices of the stories we’re telling. The people are speaking for themselves. If I had to describe those voices collectively, I’d describe them as inspirational.

Duncan: How did you decide that video was the platform you wanted to build upon?

Whitmire: We saw a lot of potential in high quality video, especially during a time when the focus on video was more of ‘take your cell phone out and let’s just capture something’ to have a video element. We really saw an opportunity to tell stories through video and create experiences that people would want to share. And to focus on social, more than trying to get people to come to a website. We changed the way we thought about video to focus on the engagement piece.

Duncan: Though it is a separate arm, the revenue from these brands supports the traditional editorial newsroom?

Whitmire: Yes, it originally launched in our newsroom. At the time I was the Director of Social Media. When This is Alabama started to take off, we saw the opportunity for the southern brand and the revenue opportunity and we realized this should be treated as a separate division of the company. It sits totally outside of the newsroom because we are thinking about revenue and didn’t want to have gray areas.

Duncan: How is your revenue generated?

Whitmire: Pre-roll, mid-roll on videos. Instant Articles on Facebook. Sponsorship, you’ll notice many of our videos are sponsored. Custom branded content, which is when we create custom content with a brand in mind. And merchandise is a big part of it. I think that’s been one of the more surprising areas. We’ve really been able to develop a line that speaks to that southern experience and what I think has worked really well is that we’ve incorporated it into our content.

Screenshot from the This is Alabama Shop at thisisalabma.org

Duncan: What revenue streams are the most successful for you?

Whitmire: It is primarily split between the sponsorships, custom content and merchandise. We’ve also started experimenting with development. I believe we were the first local media company to sell a show to Facebook news, that was our “Chasing Corruption” series.

Duncan: What does a sponsorship look like for your brands?

Whitmire: The straight sponsorship is simply aligning the brand with the content. For example on Facebook, we use the branded content tool. The business’s page is tagged, their logo is in the video and they’re getting the association with videos that are getting millions of views. For the custom videos, we will actually write something with the sponsor in mind, but we don’t do that as frequently as the straight sponsorship.

Duncan: Is Facebook the most successful social media outlet for your content? What works best for you?

Whitmire: Facebook is definitely where we have our largest audience, almost 3 million followers on Facebook between our main Facebook page and our watch page. That’s where we’ve been able to build the biggest audience quickly. But it isn’t necessarily our primary focus, we’re very invested in Youtube and we’ve quickly grown a lot on Instagram. We’re continuing to figure out what the Twitter voice for our brand is. Just as we’re interested in diversifying our approach to revenue, the same goes for our audience.

We’re thinking social, we want to meet people where we are but at the same time we don’t want to put everything we have into social. We do care about building traffic to the website, we care about newsletters and we’d like to experiment with texting. We’re always looking for new ways to reach people and have those conversations.

Duncan: It looks like you’ve grown a lot over the past two years, what did you start with compared to where you are today?

Whitmire: It started with a small staff in the newsroom, we had two full-time video producers working on This is Alabama, but everyone else staffed around that brand was already doing something in the newsroom. Then when we launched Red Clay Media we started with 12 people but today we are closer to 20.

Duncan: What was the biggest challenge in building Red Clay Media as you’ve grown?

Whitmire: Figuring out where our revenue potential was and what made sense for this division was a big hurdle to overcome. As an example, in the beginning we experimented with commercial work and quickly determined that wasn’t the right model for us. We saw our biggest potential was as a media company where we could build our own audiences and have our own brands that we serve.

Duncan: Do you try to bring your Red Clay Media audience to your main editorial content or do you let them be separate?

Whitmire: We see them as two completely different audiences. We’ve never approached social that way. We’ve always thought about distributing our content in different spaces that makes sense for that content. So even the news content, going back to five years ago, we saw it as engagement and another way to interact with our audience – not necessarily as a tool to convert them to our website.

Duncan: For newsrooms that want to try something similar, do you feel that knowing what your voice was and what you wanted to build upon is what made you successful?

Whitmire: Yes, definitely. We started with the audience opportunity. We were creating this content in the newsroom and seeing a lot of people engaging and sharing these southern experiences. It was listening to the audience that led us to this place. For any newsroom who is thinking about trying something similar, that is so important – listen to your audience and figure out what the experience is in your community that is bringing people together.

Duncan: How do you measure success? Is it revenue? Commenting? Other types of engagement?

Whitmire: It’s both revenue and audience. For audience, it really is engagement that is what has made us successful. People talking about us, sharing our content, recommending us to their friends. We are always looking at commenting and sharing.

Merchandise is really interesting because it has the revenue component but also the engagement component. We are creating these products directly from some of the conversations we are having with our audience and from the content that is speaking to our audience. When they respond and are interested in the product, to me, that really shows how invested they are in the relationship with the brand and speaks to our authenticity and ability to connect with them.

Duncan: What is one of your most popular products?

Whitmire: It’s so strange but one of our most popular products is a button that says “Bless your heart.” You literally hit the button and it’s one of our characters, a very southern woman, from our videos saying “Bless your heart.” That’s something that only makes sense if you have that southern experience, and that’s really what we’re going for.

Duncan: What is something that has surprised you from this experience?

Whitmire: We had numbers to indicate that there was huge audience interest but you never expect to grow millions of followers in a short period of time, so that was a pleasant surprise. And certainly seeing how different types of content have taken off. We had one video about how grandmothers choose their grandmother name, deciding whether you want to be grandma or mimi etc. Many of us were sitting around talking about what our mothers decided they wanted to be called. Again, it’s going back to that shared experience, we had a conversation in the office and so many people chimed in – whenever a conversation happens like that it’s always a good sign. But that video just took off. On Facebook I think it had 100 million views and you never go into it thinking you’re going to get 100 million views on something, so those are always pleasant surprises.

Duncan: Are you still looking at expanding, more brands, more revenue streams – what is next for your company?

Whitmire: Definitely expanding in what we offer in our current brands, especially It’s a Southern Thing. We are looking at launching several new series. So far our most popular content has been sketch comedy and we’ve really seen some interest in cultural content that isn’t comedy. So that’s the next phase for us, thinking about programming that goes beyond comedy.

Duncan: Are you sticking to web based video or are you considering other options like TV, radio?

Whitmire: We are definitely looking into development. We actually recently started working with a Hollywood management firm to launch a production development arm. We’re very interested in making programming for TV and streaming services. As we head into our next phase, that’ll be a big part of it.

Duncan: What are the first steps for those that want to try a similar venture?

Whitmire: The first step is going back to that audience piece, what are the topics that your audience will rally around, listening to the audience is key. Once you’ve figured out what those topics should be and I understand this is difficult and everyone has limited resources – but giving people the space to focus on building brands like this is so important. I think we were successful because we were able to fully focus on building these brands, not trying to do it on the side while also helping run day to day content in the newsroom. If you treat it as a side gig, the results are probably going to reflect that.

But listening to your audience is going to tell you what your thing is. We paid attention to what was really resonating with people and what people were identifying with and went from there. Starting with listening is going to lead you to the right place.