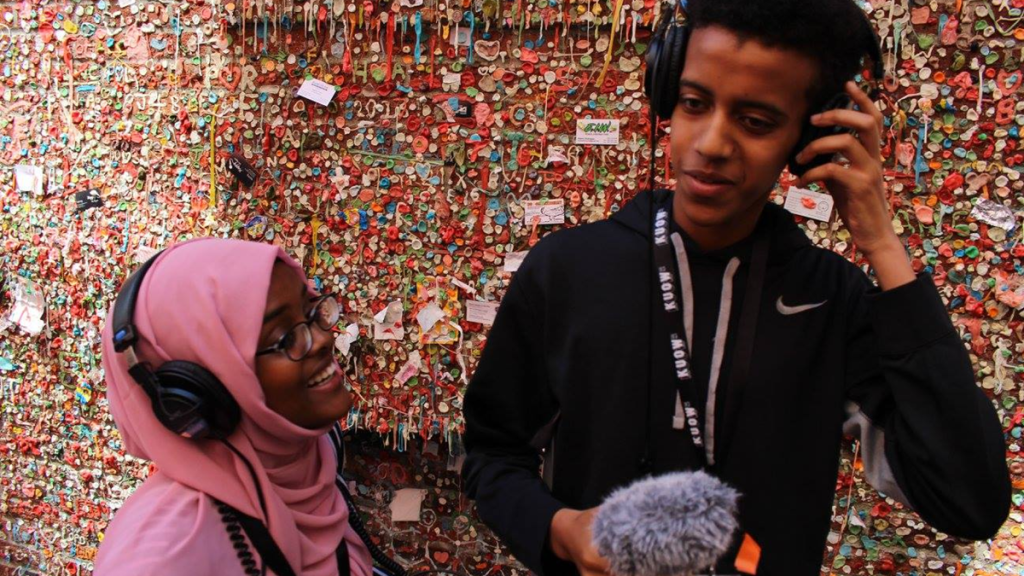 We’ve covered why youth media matters, but maybe you’re not sure what we mean when we say youth media. Youth media (for example, an article, radio news feature, or photo essay) is that which is created by a young person or somehow includes youth in the production process.

What do we mean by “youth?”

The United Nations defines youth as people between the ages of 15 and 24, but you may tweak that age range depending on your program needs and goals. For example, I have worked on programs that centered on middle school students, high school-aged youth, and young adults over the age of 18, and I consider them all youth media programs.

What exactly counts “created by or with” youth?

A youth media program ideally teaches a young person how to create a journalism piece and/or gives them the tools, support, and platform to do their own reporting.

Let’s look at an example. An adult reporter interviews students about school lunches? Not youth media. It’s media that includes youth voices, which we need more of, too. But to make it youth media, a young person could interview the students instead. Let’s take it a step further: What if a young person did all the reporting themselves? How could it enhance the reporting, or tackle the topic from a different angle?

“Emancipation: Leaving Foster Care On My Own Terms” by Noel Anaya for YR Media with Brett Myers

Noel Anaya’s 21st birthday was a milestone: aging out of California’s foster care system, a system he had been part of since he was a year old. Anaya and YR Media were granted permission to record inside the courtroom. In this piece, we hear Anaya read a letter he wrote to the court about his experiences in the foster care system.

We don’t merely hear from Anaya — the piece is created by him. We don’t hear an interview between a reporter and Anaya. He has the mic. He has the power to tell his own story to a large audience.

Anaya’s piece went on to broadcast nationally on NPR’s All Things Considered and win awards from the National Edward R. Murrow Awards and the Third Coast/Richard H. Driehaus Competition.

Since he made this piece, Noel Anaya has created his first documentary film, Unadopted, exploring the question, “What happens when you’re ‘too old’ to get adopted?” Anaya and his documentary won the 2021 Media for a Just Society Award in the youth media category.

“’They can never lock your mind up.’ Three stories from juvenile jail” by seven teenagers using pseudonyms for KUOW’s RadioActive Youth Media

This project takes the listener inside the Patricia H. Clark Children and Family Justice Center, a youth jail in Seattle, Washington. We hear directly from teenagers who are incarcerated. The teens decided what they wanted to share and learned how to use the audio equipment. We even hear the sounds of juvenile jail that youth producers recorded on their own time: officers, morning prayer, cell doors closing and locking, and the outbound call from a jail.

I don’t think an interview controlled by an adult journalist would have the same impact or depth. We get to listen in on youth interviewing each other, asking each other about what they want to talk about, from Ramadan to alternatives to incarceration. The teens can talk to each other as they normally would, and they can talk knowing that the person listening to them understands. It’s a conversation between people who have a level of trust with each other because they’ve been through similar things in life. They don’t need to cater to anyone but themselves, allowing them to go deeper in the interview.

This next example comes from VENT, an award-winning podcasting collaboration between VICE UK and Brent 2020 from the London Borough of Culture. VICE worked with young people from a single London borough, Brent, to produce nearly 100 podcasts in a year.

Lynette Nora Onek took on the series three theme of “justice” in her episode, “Problem Kids.” Nora was 16 years old when she worked on this piece. She tries to answer the question, “Why are Black kids the most likely to get kicked out of school?”

Onek’s interviews are a shining example of how a youth reporter can approach a story differently than an adult reporter.

“She really rose to the challenge of some big interviews, and connected with — and tactfully challenged — contributors in such an impressive way,” said Jesse Lawson, the senior producer of VENT.

The listener follows Onek’s personal curiosity throughout the podcast as she weaves interviews, observations, and reporting together seamlessly.

“It’s a really good mix of being quite a local story which is very personal to Nora, but then it broadens out to themes that are really relevant to everyone who listens, and she keeps it really accessible,” Lawson said.

In “Not Allowed to Be a Kid,” Amaru Howard writes about his experiences as a tall, Black youth. He combines his research on police violence with personal stories from his young life, including reflections on nearly 10 years of surveillance by police officers. He opens the piece with a memory from when he was 6 years old.

Howard takes abstract statistics and breathes life into them through personal anecdotes from his life.

Amaru Howard won the 2022 Media for a Just Society Award for the youth media category for this piece. He produced this piece for Youth Communication, a nonprofit publisher of teen-written stories and curriculum for educators to help students build social and emotional learning skills.

“Nine People, One Bedroom: A Teen’s Take on Life In Poverty” by Jairo Gomez for WNYC’s Radio Rookies

Let’s time travel back to 2014 for the next one. This is an old favorite of my co-RJI fellow Kelsey Kupferer, from one of the original youth media programs in public radio, Radio Rookies from WNYC.

Gomez follows his own curiosity, sparked by the realization that his family’s annual household income is $15,000 below the poverty line.. He asks his family members straightforward questions about their situation. Because he is the interviewer, his family members seem comfortable with the conversation, even when it enters difficult topics, like exactly how much his parents make in a year. He navigates conversations in both English and Spanish, interviews with multiple family members, and his own complicated feelings on class, his education and his future.

Gomez lets us glimpse inside his home life, not only for the audience to understand a little more about class struggles in their community, but also for him to process his own life. Even if a professional adult journalist wanted to tell a similar story by following Gomez, they would be hard pressed to avoid extractive journalism. Instead, Gomez tells his own story and his family’s story, and follows his own curiosity and purpose.

“’Gracias por todo.’ Delivering food during the pandemic was worth it to hear my mom say these words” by Luis Hernandez Vargas for KUOW’s RadioActive Youth Media

In this piece for KUOW Public Radio, RadioActive Youth Media producer Luis Hernandez Vargas shares his experience working for a food delivery service during the pandemic while also caring for his immunocompromised mother.

This piece was part of the KUOW series, Voices of the Pandemic. The series shared first-person accounts from the pandemic, with the goal of “highlighting the diverse experiences of a community in crisis.” Because of this goal, the team knew they wanted to include youth perspectives, too.

Hernandez Vargas takes us into his car, restaurants, and hospitals as he makes deliveries. For me, it’s the details that hit me the hardest as a listener, like this line: “And then there were moments that just took the life out of me, like on Mother’s Day — delivering a $160 steak and wondering if I did enough for my mom with the flowers I got for her.”

This is not a list of the best youth-produced stories of all time, but I hope these examples help demonstrate how youth media can go where professional adult journalists may not be able to.

Have a favorite youth-produced story you want us to check out? Email us! Want to start a youth media program at your station, but don’t know where to start? Sign up here to get more tips from Mary Heisey and Kelsey Kupferer on building or strengthening your youth media program.