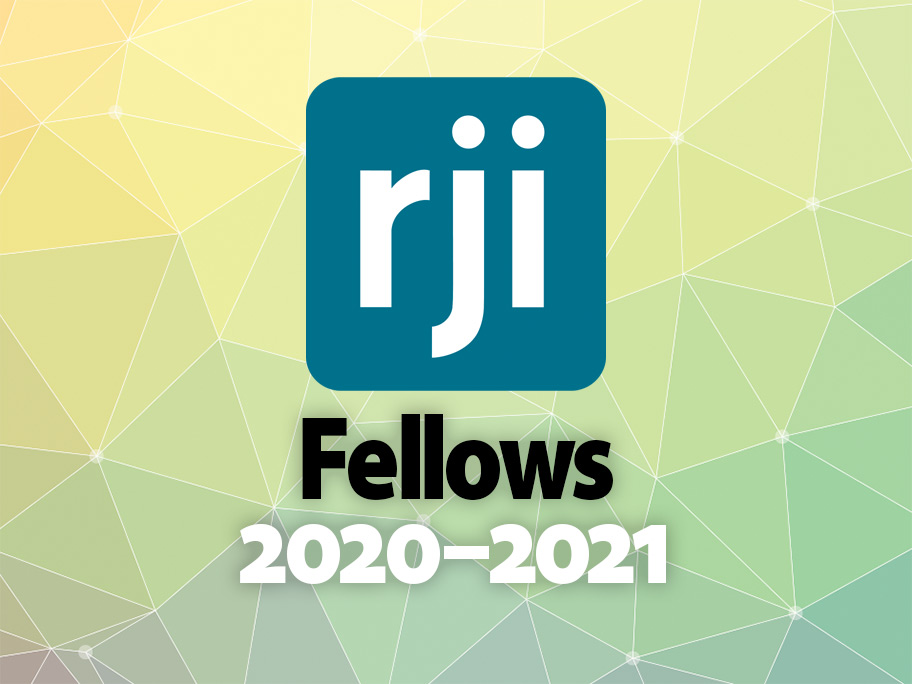 Seven fellows at the Donald W. Reynolds Journalism Institute who have been working on innovative projects that can benefit the journalism industry, over the past eight months, are wrapping up their projects.

Six shared findings and insights from their projects, as well as links to resources during a recent Q&A webinar with the public. We’ve also included an update from RJI Fellow Melba Newsome, independent journalist and editor in Charlotte, North Carolina, who was not at the webinar.

This year the fellows tackled building a data team in a small newsroom, creating guidelines for unpublishing, harnessing the power of obits for revenue generation, diversifying sourcing and more.

Here are some of the findings and insights from the webinar:

Clayton Aldern, data strategist at Grist, a nonprofit environmental magazine, says that about 73 percent of people in the U.S. believe climate change is real, but only about 19 percent believe that anything can be done to stop it. Grist is interested in shifting this narrative. They created a data journalism unit at their nonprofit newsroom to help do that in a way that was more accessible to audiences.

During their fellowship, the Grist team created the data journalism unit in a way that it could be easily and inexpensively replicated at other small/nonprofit newsrooms interested in building out data journalism capacity regardless of subject matter, he says.

The data journalism unit and guide to developing one in the newsroom is located at https://dug.news.

Deborah Dwyer, a Ph.D. candidate at the University of North Carolina at Chapel Hill, is working with newsrooms to create tools to address the ethics and practicalities of unpublishing, or requests to remove, de-index, or alter previously published news online.

The resources will be published on her website, unpublishingthenews.com, which will launch soon. The site will include newsroom tools, industry research and a policy repository to help other newsrooms.

During her fellowship, she partnered with newsrooms including KOMU-TV, the Columbia Missourian and the Chattanooga Times Free Press. At KOMU-TV and the Missourian, she is developing a set of pre-publication practices and a basic unpublishing policy.

In the past few decades, it’s become commonplace for news organizations to run reports about minor crimes. But that leads to unpublishing requests that could be avoided if news outlets revisit their digital reporting practices, says Dwyer. For example, some news organizations now have policies that they do not report on certain types of minor crime; others limit their use of mugshot photographs, especially in cases where someone is arrested but not yet charged with any crime. This practice also exacerbates existing social inequities in the criminal justice system, creating additional barriers to education and employment for people of color.

At the Chattanooga Times Free Press, she is developing a formalized submission and intake process, as well as a back-end tracking system. The form will allow the news outlet to place it on their website and use it to streamline the intake process for unpublishing requests. The tracking system will consolidate information on the newsroom’s request decisions and the reasoning behind them, serving as an ongoing record for accountability and transparency.

Kristen Hare, a staff reporter at Poynter spent her fellowship rethinking obituaries for digital audiences by using creative storytelling methods to build audience, digital subscribers and to rebuild a sense of community with the Tampa Bay Times. Her hypothesis when the project started was that feature obituaries are a local news brand that no one has mastered, but that there is an opportunity to tell these stories on digital in new ways and get people on the path to subscriptions and to supporting local newsrooms.

While writing these obituaries for the Tampa Bay Times, Hare has learned that people want to read about ordinary people who’ve done extraordinary things. She learned that from studying analytics provided from Parse.ly.

“One of the things that’s happened as newsrooms have shrunk and we’ve lost these feature obits is newsrooms are still writing news obits on politicians and local famous people,” says Hare. “But I think what these numbers are showing is that people want to read about ordinary people who have great stories.

She’s also learned that obits are often evergreen content and are leading to people to click on other articles that they find after reading an obit, so the Tampa Bay Times team is looking for ways to get the evergreen pieces out in view more and help to build readership.

Hare says she can tell that these feature obituaries have gotten people onto the path to subscription.

The fellowship has also taught her some quick takeaways on writing feature obits:

While the rest of the fellows are wrapping up their projects, Hare will continue her RJI Fellowship into the summer and has plans to develop playbooks on the following subjects: reviving feature obits, launching an obits newsletter and marketing feature obits and subsequent newsletter.

Melba Newsome, independent journalist and editor in Charlotte, North Carolina, has been working on a diversity-training program during her fellowship. The project launched to help newsrooms include people of color and underrepresented groups in their reporting to be more reflective of the communities they serve.

During the fellowship, Newsome worked with three media partners — WFAE, the Charlotte Observer and North Carolina Health News to have them provide input and feedback to make sure the curriculum and training protocol she developed is relevant and useful. One big takeaway for WFAE has been to make tracking sources a priority amid all the work the staff is juggling, says Ju-Don Marshall, chief content officer.

“We’re always going to be busy, but busy is not an excuse to not embrace the things that will make us better,” says Marshall. “What we prioritize is what we care about. So if we’re too busy to do this kind of tracking and to make these kinds of improvements, then we have made a decision that those things are not important to us.”

As Newsome wrapped up the fellowship and shared other learnings like this from WFAE, she launched the “10 Steps to More Inclusive Reporting” this spring on the RJI website.

She will share feedback from the newsrooms as well as what she learned along the way like about databases that can provide diverse sources.

The guide will also include information about:

Max Siegelbaum, co-founding editor and a reporter at Documented, experimented further with producing a Spanish-language WhatsApp publication that delivered information and news about immigration issues in New York City and beyond.

Documented’s audience editor had the dream of creating a guide of being undocumented in New York, answering questions on the various specific circumstances that people find themselves in from starting a business to seeking healthcare to getting a lawyer to obtaining a driver’s license, says Siegelbaum. The team would find answers and then turn it into news content for a text and audio newsletter. This allowed them to experiment and see what was working and what wasn’t working, says Siegelbaum. They’ve also done call outs to their audience on different subjects – tell us what you’re experiencing, has anyone seen this? Send us a note about what you want us to investigate, etc.

Siegelbaum says the news outlet is preparing to launch two similar projects to immigrants from the Caribbean and one for immigrants who speak Chinese.

He has created an instructional step-by-step guide on how to create a community-based publication like this in other communities. It will be published later this month on Medium and RJI.

Dagmar Thiel, USA director of Fundamedios, has been working on documenting the main challenges Latino journalists face in the U.S. and how discrimination and intimidation affect the access to information for the Hispanic community.

Her team recently completed a research report about discrimination against Latino journalists and how intimidation affects media outlets.

In their findings, Thiel’s team learned that 45 percent of the 115 journalists they interviewed felt discriminated against for different reasons. The main reason cited was salary or contract conditions being different from others.

In addition, they learned that female journalists who come from a Latino origin earn 37 percent less than their white male peers do. To help address this issue, Fundamedios created a toolkit so journalists can improve their negotiation skills.

Check out the Pay Gap Toolkit.

Sara Quinn, who teaches at the University of Minnesota, has been working on a project with the National Press Photographers Association (NPPA) to explore what makes photojournalism important. The partners want to help newsrooms and nonprofit publishers that struggle to produce quality visual components because their resources have been greatly reduced. In some dire instances, entire photo departments have been eliminated, and stock images are widely used.

During the fellowship, Quinn’s team did video interviews with 22 people including photo editors and photographers about images that made a difference in the community or inspired them.

She’s taken quotes from the interviews, pulled in inspiring photos, and turned them into social media posts for Facebook and Twitter. She hopes citizens, journalists and others will see the photos and quotes and have conversations about the importance of strong photojournalism. The posts will launch in late March 2021.

Quinn will also be conducting a caption study with citizens and others that’s part of a bigger research project for NPPA she started in 2015 on what people notice, what they remember, value and share when it comes to photography. She also wants to know if photos are observed differently by age, gender and other criteria. People will study 20 images, which will each have four different versions of a caption.